What I did on my summer vacation (in October)

Posted on November 12, 2017 by elisefrancesmiller

In October, Jay and I set out on a long-planned New England vacation, which turned out to be a delightful adventure. We flew east, rented a car, and drove through the countryside of Maine, New Hampshire, Massachusetts, Connecticut, and upstate New York. Our goals were to enjoy the fall foliage and to tour the homes of literary and artistic giants of the 19th century. As it turned out, the Maine hikes and brilliant forests connected integrally with those homes in an unexpected way.

Why did I set out to tour eleven New England houses? As a writer and art historian, I have always been fascinated by the lives of writers and artists of the past, and understanding their trades, have admired all the more their struggles and successes. A few years ago, I read The Flowering of New England by Van Wyck Brooks. This was an intellectual history about the first Americans to separate themselves from European influences and to create a genuine, American philosophy and literature.

I also read two books about poet Emily Dickinson, My Wars Are Laid Away in Books:  The Life of Emily Dickinson by Alfred Habegger, and separately, Maid as Muse, How Servants Changed Emily Dickinson’s Life by San Franciscan Aife Murray.

All of these books and the lure of the fabled fall foliage set our course.

A shout out to the fabulous tour guides of New England! We toured the homes of: Henry David Thoreau; Amos Bronson Alcott and his daughter, Louisa May Alcott; Emily Dickinson, and her family dwellings; Mark Twain; Harriet Beecher Stowe; Edith Wharton; Thomas Cole; and Fredrick Church. Others we visited, but did not tour, were homes of: Henry Wadsworth Longfellow, Ralph Waldo Emerson, and Nathaniel Hawthorne (Alcott’s neighbor). All of the landscapes, architecture, interior design, and  gardens were worth visiting, though not all  have been discussed in the space of this blog.

Our first state was Maine, where we drove as far north as Moosehead Lake, hiking and observing that the trees in the vast tracts of forest were short compared to those in California, but extended in their vibrant mid-season array across plains, hills and mountains as far as the eye could see. 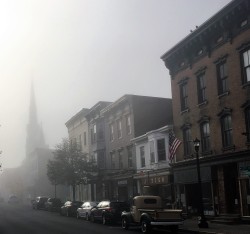 By the time we arrived further south, avoiding Boston, we noted that the leaves were still turning, and that to our surprise, there is much less development than we expected across the farms, resort areas, and forests of Western Massachusetts and the Hudson River Valley. We enjoyed staying in and exploring the small towns, which had preserved their “Main St.” character.

Outside Concord, MA, we circled Walden Pond, and saw a replica of the tiny house Henry David Thoreau built for himself, welcoming visitors and not at all the hermit he is made out to be. His visitors, and the people he saw when he hiked the mile and a half to Concord, included friends who became the “Transcendentalists.” This mid-19th century group, among many others,  included Ralph Waldo Emerson and educators Bronson Alcott (father of Little Women’s Luisa May) and Margaret Fuller.

The Transcendentalists were a literary, political, philosophical and educational movement which, like the concurrent Romantic Movement in painting, celebrated our intuition and inner imaginations, with inspiration from natural beauty. It rejected industrialization, organized religion, materialism, social convention and the trend toward veneration of science and empiricism.

To be clear, I admire scientists, and respect their findings, but I can also respect many Transcendentalist views. This was a religious philosophy, with both God and nature at its center. Their ideas were revolutionary, but quickly disseminated through public speaking and literary projects. Its adherents also founded schools and made changes in public schools. Most were active abolitionists and supported women’s education and suffrage. 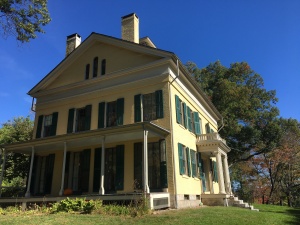 In Amherst, I toured Homestead and Evergreens, homes of Emily Dickinson and of her brother and his wife, William Austin and Susan Dickinson, across the lawn. I took the self-guided tour through the garden Emily tended, natural imagery finding its way into her poems. Frederick Law Olmstead, famed landscape architect of NY Central Park, advised Emily’s brother on the design of his house and Amherst College.

Olmstead’s work also found its way onto the landscape at our final stops in upstate New York. These were at the homes of painters Thomas Cole, founder of the first distinctively American art movement, and Fredrick Church, Cole’s most successful protégé. There, we could see that their Hudson River Valley school evoked and reflected our entire journey, from the natural bounty of Maine through the stewardship of nature in both Concord and Amherst.

Landscape tour hike around Fredrick Church’s 300 acre property. View of the Hudson River Valley he painted, with one of many maple park benches by Olmstead. Olana State Park, NY.

Picnic on an Olmstead bench.

Thomas Cole’s parlor with view of the Hudson River. Note his paintings adorning the walls.

What did I gain from viewing these historic homes, gardens, landscapes, artifacts and artworks? Besides fulfilling a dream, I was able to feel – not just observe and learn – but feel how these creative souls lived, struggled, supported one another, failed and succeeded. And isn’t this what Transcendentalism was all about? To look at the cloud formations outside my window, and not to calculate and analyze  their significance, but instead, to be aware of the emotions they bring to me, and how my relationship to them places me in nature and increases my humanness.

Perhaps we might benefit by accepting a lesson from New England’s mid-century thinkers. As on all vacations, I began to slow down, but on this particular road trip, I experienced a greater sympathy with and protectiveness for our natural world, and for all people, throughout history and today.

P.S. to my readers: What summer (or fall, winter, spring!) vacation taught you something you did not expect or had never thought about before? Where would you send me and Jay on our next adventure?!?

Like Loading...
This entry was posted in Arts and society, literature and tagged art history, literature, New England history, Travel. Bookmark the permalink.