A Berkeley Girl Looks Back

Posted on May 10, 2018 by elisefrancesmiller 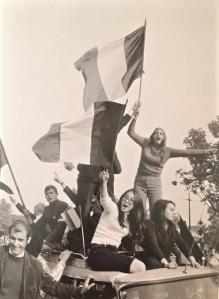 Photo of Paris 1968 by Serge Hambourg.

Fifty years ago this month, the May Revolution began in Paris and spread throughout France. The population of France was just over 50 million, and 10 million workers went out on strike. Imagine if today, out of 327 million Americans, 65 million or one-fifth, did the same! The “Events of May,” as they are called, were an attempt to depose a president, to change a political system, to improve an educational system, and to bring French cultural and social norms forward from the 19th century and into the modern world. The goals of the French were numerous and varied, some achieved, some not, and it was over by the end of June. But it was most certainly a “real” revolution, the one I witnessed at 21 years old, and depicted in my novel, The Berkeley Girl, in Paris 1968.

As if an alarm clock went off in the minds of my friends and fans, on May 3, 2018 and in days following, I began to receive numerous emails with attached articles and commentary about the anniversary. Two articles even arrived by snail mail, cut neatly out of the newspaper. Perhaps my recent email blast about upcoming dates of Bay Area book events triggered the onslaught. Here is, in part, what I wrote in my email, which captures my emotions in looking so far back: 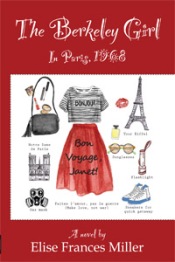 “[In 1968}, the May Revolution rocking the streets of Paris intrigued and inspired students gathering on Sproul Plaza at UC Berkeley and around the world. Hope peaked for new freedom, social justice, and peace in that pivotal year. The Berkeley Girl books tell the compelling story of how young lovers struggled to understand one another and a world in which the old values were turned upside down…  Fifty years! …When I left Los Angeles in 1968 for Paris, to study French and soak up art and culture, I had little idea that I would be bringing all the pressures of the anti-War movement from my beloved Berkeley campus across the sea. I remember painting the image of a hot air balloon, floating over the planet to my safe haven in the City of Light. Then the Revolution broke out.”

Thank you, dear friends, for all of those articles, because they helped me to think deeply about  the May Revolution—what it meant for us then, how the world has changed, and what it says to us today. 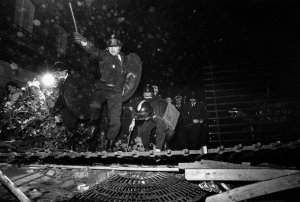 Some of those articles proclaimed the Revolution worse than a failure. The immediate political goal was to oust the World War II hero and President Charles De Gaulle, a right-wing, aging leader who had taken control of the media. When the old “Generale” unleashed the French army to quell student demonstrations, peaceful protests and teach-ins became a revolution. For the first time in modern history, the middle class, working class and intellectuals joined forces in fury. Where was the morality in injuring, perhaps murdering, those bright French children?

The students and their adult compatriots were not discouraged. They answered violence with violence. Street battles, destruction of private property, hospitalizations and imprisonments, a million citizens marching through the city, and the nationwide strikes followed, bringing the French economy and the city of Paris to a standstill.

With the benefit of hindsight, I realize that today, with unregulated, corporate arms sales, and a social and mass media that did not exist in the 1960s, we have a far more dangerous situation. There were more violent revolutions in France before, not to mention in Russia and British colonies worldwide! But in Paris, as in America, the euphoric college students in the Western, capitalistic “democracy” expected to win without the kind of struggle they encountered. Today we have seen that “revolution” brings all levels of both good and evil outcomes. Protests where people gather in city squares to demand their rights can lead to the deposing of unpopular, dictatorial leaders (Egypt), but not necessarily with results that make everyone happy. And protests where people march for their rights can lead to the kind of viciousness that tears apart an ancient and venerable nation, and destroys the lives of millions (Syria).

In 1968, even though the political Revolution failed, the French people gained in large part what they had sought: adoption of the social and cultural values and norms of the modern world. In that sense, it was a success. Up until that time, France was stuck in the 19th century. Have you ever read Henry James’ The American, written in the 1870s? France was a patriarchal and hierarchical society. Morality was less about human decency and compassion than about the rules and repressions mandated by the family, the Papa, and the Generale. Protestors wanted freedom of speech, assembly, the press, and religion, in the broadest sense, not to mention sexual freedom and women’s and gay rights. They wanted to open up the discussion. Most telling, when students returned to classes, it was not to tedious lectures and remorseless exams. They were permitted to ask questions and dispute ideas as never before. France completely changed after 1968, never to turn back, no matter who held the political reigns. In The Berkeley Girl, the exhilaration, fear, disappointment and determination all bubble to the surface for one American student and her new French friends.

Here is one of my favorite NY Times articles, from May 5, 2018, in which that social and cultural revolution is described: “May 1968: A Month of Revolution Pushed France Into the Modern World” by Alissa J. Rubin.

Perhaps the cultural and social changes in France are best described by another Times article, penned in 2008. In “May 1968 – a watershed in French life” (April 29, 2008), Steven Erlanger points out, “France was where the protests of the baby-boom generation came closest to a real political revolution…a revulsion against stifling social rules of class, education and sexual behavior… He calls France a “straight-laced country where the birth-control pill had been authorized for sale only the year before.” He also quotes Alain Geismar, a young professor and protest leader whose involvement I follow in The Berkeley Girl, in Paris 1968. Geismar said that “French society in May 1968…was completely blocked… A conservative recreation of pre-World War II society, it had been shaken by the Algerian war and the baby boom, its schools badly overcrowded.”

When De Gaulle exiled student leader Daniel Cohn-Bendit as an “undesirable,” many protestors marched with signs that read, “We are all undesirable,” an action encouraged by this poster.

Here is another favorite, based on my lifelong attraction to visual images. This article about a current exhibition in Paris – if you happen to be there this month – is called “Printing a Revolution: The Posters of Paris ’68.” During the major strikes and student uprisings, the École des Beaux-Arts turned itself into a workshop for revolutionary messages. No social media then! But these powerful images have stood the test of time.

By June, 1968, with the end of the Revolution in France, the cobbled streets were paved over, the students headed home for the summer, and I, too, left Paris. I was still in Europe during the horrendous violence inflicted upon students at the Chicago Democratic Convention. I heard a first-hand account from a friend. I always wondered if in America, the powers opposed to freedom of expression, especially if it were against the “regime’s” Vietnam War, had learned their tactics and justified their morality by keeping close watch on Charles De Gaulle.