Spreading Pain or Catharsis? Perils of Turning My Own Era into Fiction

Posted on June 22, 2012 by elisefrancesmiller 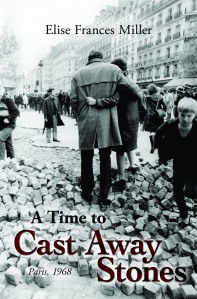 Given the exhilaration of the past week, it is easy to forget certain painful realities. Readers of my historical novel, A Time to Cast Away Stones, set in Berkeley and Paris in 1968, might be forced to relive sorrows and shocks, and to experience emotions that they would have rather left behind. Others may find themselves drawn into a funk by comparing fictional characters’ idealisms and expectations to the chaos and polarization gripping our world today.

Here are some excerpts from notes I have received. These people have not given me permission to use their words in my blog, so I am not including their names. I hope they feel sheltered here. But I want them to know that I am grateful to them for bringing me back to earth regarding my subject.

I wish that the events of the late 60s were not so present for me and that your book hadn’t, inadvertently, opened some painful memories… Which I think means that it’s important that you wrote the book. For many of us that period of time was so defining. And, perhaps, crippling.

Your novel has me reliving 1968 in Berkeley and Paris, with all of the complicated feelings that that is bound to evoke…

It has been years since I began writing the historical novel, A Time to Cast Away Stones, set in the time of my own youth. When I began, why I began, is because I was haunted by  memories from the late 1960s. My writing has been an exploration of what I felt then, what I could and could not have done better, how I was and was not to blame for the evils all around me. I have come to terms with the frustration I felt when laughed or shoved “off the stage” by parents, professors, politicians, and pundits. And I have come to acknowledge the limits of both humans and governments.

In short, the writing process has been cathartic. And in some sense, the acceptance of my work for publication by people I admire – at California Writers Club-SF Peninsula branch and Sand Hill Review Press – has been a vindication of the years closed up with my vivid memories, learning to express myself through fiction. And then, as if all this wasn’t gift enough, there was the “pure joy” I have described elsewhere at speaking to the many wonderful friends who turned out for my book launch party at Books Inc. in Burlingame last week.

My readers, on the other hand, have enjoyed no such catharsis. Many of my readers were traumatized by the era. Many struggled with their yearning for peace and their notions of what a society should provide for its citizens. They broke with their parents, put themselves out on the streets, at great risk, and they lost dear friends and loved ones in a war they considered ill-advised, illegal and immoral. They felt those lives were wasted, those deaths unnecessary, and they never got over it.

That’s where I was, at one time, and I can’t let myself forget it now, now that others are taking the journey with Janet Magill and Aaron Becker and reliving some memories that were and are, frankly, quite terrible. At the beginning of the novel, it may be difficult to read about Janet’s naïveté and Aaron’s cynicism. Or to laugh with the characters who, after all, were young and alive and often enjoying themselves quite a bit! But as the story proceeds, and readers get to know the Europeans that change Janet’s perspective and her life—Teo the Czech, and Remi, Bérnard, Le Grand Laurent and all the French who found themselves together in hope during the month of May, 1968. My hope now is that these readers find their emotional balance transformed and pain ameliorated by this story.