Posted on August 11, 2015 by elisefrancesmiller

In a recent and rare Facebook post, I told my friends that this summer has been a “watershed in my writing life.” I decided to elaborate. This is about my Bay Area literary associations – along with plugging away at my computer many hours, many years, they have been at the heart of that life.

Ansary, Games Without Rules: The Often-Interrupted History of Afghanistan

Tamim Ansary has been a valued mentor and friend since 1999, when I began to attend the weekly 2-hour critique sessions, the San Francisco Writers Workshop. This month, after his 22 years as group organizer and leader, Tamim stepped down—a loss that cannot be overestimated in the literary life of San Francisco. SFWW, which claims to be “the oldest continuous running workshop in the U.S., meeting weekly since 1948,” met then at the Meridian Gallery, a city-sponsored artists’ cooperative downtown on Sutter St., and stayed with the Gallery even when they moved to Powell St. After each session, we hung out for an hour or so at Lefty O’Doul’s, a huge, slightly seedy venue with questionable buffet food, gooey pie and any drink you could crave by nine on a Tuesday night. Over a year ago, SFWW switched to The Alley Cat bookstore on 24th.

Throughout all that, Tamim held us together. Like many writers, I came for several years, cut out for a year, returned for another, and so forth over fifteen years, depending on writing projects and the demands of my day job. New faces and old friends always greeted me every time I dropped in from a hiatus, and Tamim was the touchstone, always there. When no one else “got” my work, Tamim always did, and never failed to make the most insightful and constructive comments. Many will miss him and call him “friend,” and even though the last time I attended was a year ago now, I will miss him. In July, I attended his final “Writers’ Tea,” a Workshop tradition he created in his home, usually during the summer and the Dec. holiday season. Tamim and his wife Debbie Krant were gracious hosts to a community of writers of all levels of skill and accomplishment. They both respected the effort and the results, but most of all, the intention and the will.

As a writer of fiction, memoir, essays, articles, children’s books, and nonfiction texts, Tamim offered a stellar example of what a writer’s style, work and life might become. From his own website (http://mirtamimansary.com/): ”Winner of the 2011 Lifetime Achievement Award from the Northern California Booksellers Association, Tamim Ansary is an author whose many books include Destiny Disrupted, Games Without Rules, The Widow’s Husband, and West of Kabul, East of New York.”

Although I may occasionally drop in to Alley Cat Books to see what is being read, I realized last year that for me, the format and the group had run its course. I was looking for a critique group closer to home, but may just rely on writer/editor friends whose own work I have critiqued or edited, or online “Beta testing,” as so many authors do now.

Which brings me to other summer “watershed” events. After five years, I have stepped down from my position as Membership Chair of the California Writers Club, San Francisco/Peninsula branch. CWC has been a major part of my life since just before I retired from Stanford’s Haas Center for Public Service in 2008. Its meetings are monthly, and since becoming a board member in 2011, I have made friends and exchanged services/skills with other members; volunteered at their annual project , mounting the Literary Arts Stage at the San Mateo County Fair; published in many issues of the two journals associated with the club, The Sand Hill Review, published by member Martin Sorenson, and the Fault Zone series, the club’s own anthology; attended and learned about craft, marketing and publishing from monthly speakers; read, listened and learned at the monthly Open Mic; watched as the club developed a website, e-newsletter, and Facebook page; and served as Membership Chair, encouraging new members with our slogan, Writers Helping Writers. In 2011, having done most of that, I received a phone call from CWC past president, Tory Hartmann, who was about to launch her independent publishing company, Sand Hill Review Press. She wanted to read my novel with an eye toward publication. Now Tory has lent her extraordinary range of skills, energy, and enthusiasm to her full-fledged operation (https://www.sandhillreviewpress.com/). I am proud that mine was her first novel, and that I am now one of a “stable” of many SHRP authors. 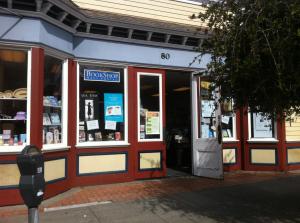 Join us for the WNBA panel at West Portal Bookshop, Oct. 29th!

Two other groups I have benefited from are the Historical Novel Society and the Womens National Book Association, NorCal chapter (http://wnba-sfchapter.org/). The WNBA, under the superb leadership of Kate Farrell, who published my work in The Times They Were A-Changing: Women Write About the 60s and 70s, focuses on service in the arena of literacy/writing/literature. I hope to increase my involvement in this group as time goes on. If you are in the area, please join us on October 29 at 7 pm at West Portal Bookshop in San Francisco, where I will moderate a WNBA panel of women authors who have written the stories of pointedly adventurous and courageous women. I am honored to present their work.

My final group is the Historical Novel Society, Northern California chapter (https://historicalnovelsociety.org/), meeting quarterly and co-founded by my good friend and a talented historical novelist, Mary F. Burns (http://www.maryfburns.com/). Many have asked me to define “historical fiction,” and have wondered why the spinner of tales about the late 1960s considers herself an “historical novelist.” My first answer is that, although I lived through that period, it was necessary for me to carry out the same kind of painstaking and endlessly involving history that a novelist writing about the Renaissance would conduct! And that then, from this research and my own imagination, the tale is woven. Same process.

Great-aunt Bessie Kantor Greenberg in elegant attire, Milwaukee, c. 1897. She was like one of the “kids” on our trip to Disneyland in 1957!

But another reply would be in my hopes and plans. For the past three years, in between visits to Seattle to my wonderful son and daughter-in-law and our three grandchildren, and New York to visit my dynamic daughter, I have been researching my family history in-depth and documented on Ancestry.com and JewishGenealogy.com. I am fortunate enough to be able to bounce ideas off my friend and cousin, Janie Tyre-Karp, whose genealogical discoveries have been a steady influence and encouragement. I find inspiration in the immigrant tales of family loyalty, tenacity, and creativity. I look forward to the long project of writing non-fiction essays for my grandchildren, and then weaving readable historical fiction out of the amazing threads contained in this material.

The effort to maintain focus in two such different areas, the late 1960s and 19th-early 20th centuries, is mitigated by the relief each brings to the intensity of the other. Everything takes longer, but I am moving forward. And I am grateful, because none of my blessed writing life would have been possible without every one of these organizations. In this watershed summer, the “group activity” may change or fall away, but the support, comraderie, intention, motivation and the work itself, continue.