Posted on August 5, 2016 by elisefrancesmiller 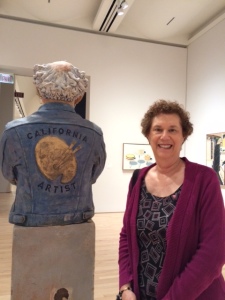 One CA artist is glazed stoneware by Robert Arneson. The other one is real, and obviously enjoying the new SFMOMA.

During a discussion at the World Fellowship Center, the family camp devoted to social justice, environment, and peace which I attended last month, I heard one decades-long camper complain that she felt the program had become “lightweight.” “We used to be focused on tough progressive lectures and strategy sessions,” she remembered. “Now it’s all arts and crafts.”

At the time, we sat pasting magazine cutouts onto cigar boxes, while my daughter was in the social hall learning to play the ukulele. Who was I to disagree? Yet our week had hosted lectures on how to defeat ISIS without violence and the state of labor unions today. Perhaps I wasn’t the one to judge, since the programs I felt had the most impact were the “fluffy” performances of dance, poetry and music and activities which ranged from memoir readings to, yes, collaging boxes.

My life has been centered on the arts, first as an art history student at UC Berkeley and UCLA, later as an arts teacher, newspaper critic, and magazine columnist. Even as I gradually weaned my way out of the field and into “communications,” I read voraciously, and attended every exhibition, performance and arts offering that I was able to fit into my schedule.

So when my husband Jay attended a Stanford Jazz pre-concert talk within a few days of my return home from World Fellowship, with a startling takeaway that intrigued us both, it gave me pause. Maybe I would disagree with the disgruntled old camper after all!

KCSM’s Jesse ‘Chuy’ Varela reflected in his talk that a small-time 1990s recording called the Buena Vista Social Club had influenced the whole course of history. After rising to a popular, 12 million-seller, it spawned a documentary. Following that, Cuba was no longer a forgotten enemy enclave, but the focus of intense interest. People began to look, listen and re-visit the course of history. Jessie drew a direct line between the music and the eventual U.S. recognition of Cuba. Today, our country enjoys relations with our former off-shore nemesis in a number of important areas, and continues to highlight its music.

I began to remember the role of the arts in the 2011 Occupy Movement, which swept the country through social media and bequeathed the words 99% for Bernie Sanders—and now the entire Democratic party–to use with consequential effect.

The Occupy Movement in 2011, just as the Paris Revolution depicted in my novel, The Berkeley Girl, in Paris 1968, used the creative expressive power of poster art to gain support. [Select the link to see hundreds of Paris 1968 posters!] 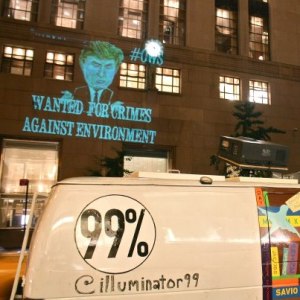 Both historical movements found posters amazingly effective. Occupy posted not only on walls, but online. The performance artist group The Illuminators supplied the Occupy Wall Street protests with citywide images. Their slogans lit up NY buildings and were hits on YouTube.

When the Democrats went to Philadelphia last week, CBS Sunday Morning produced a segment on Philadelphia which exploded my awareness of the powerful influence of the arts on society. The Philadelphia Mural Arts Program has produced 4000 murals over the past 30 years – and still going strong! Participation as artists and supporters unites a cross-section of the community. Within Mural Arts, The Guild is one of several special programs offering apprenticeships to formerly incarcerated individuals and young adults on probation. Another provides opportunities for incarcerated fathers and their kids to paint together each week. And perhaps most powerful of all, the images themselves influence the way Philadelphians regard their city and their lives every day.

Not to be left out, the Bay Area has its own similar organization in East Palo Alto, the Mural Music and Arts Project, EPA–Educate, Empower, Inspire Youth through the Arts/.

Besides music and visual arts, literature is an “art” which changes minds and hearts, arguably in a more direct way. To be sure, my novel The Berkeley Girl simply describes my personal version of history. But further, my hope is that the story will inspire readers to speak out or act in whatever way they are comfortable, when they understand how protagonist Janet Magill, a shy and apolitical college freshman, was motivated to do when faced with intolerable injustice.

What visual arts, music, dance, poetry or prose has changed your mind or inspired you to take action? Please “Comment” with the art reference and how it motivated you!