Reading Proust with Friends – The Celebration!

Posted on December 18, 2016 by elisefrancesmiller 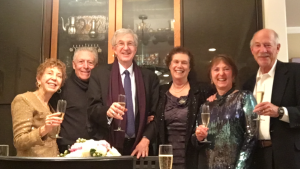 “Remembrance of Things Past by Marcel Proust, also called In Search of Lost Time, is a multi-volume novel, the story of a man’s journey through life, starting when he is a boy.”

So began our presentation last night, three women trying to explain four years of reading Proust together to our husbands. Not only did Jay, Larry and Stuart listen attentively (and that after imbibing red wine, pâté de foie gras, and all manner of rich French hors d’oeuvres and entrees), but they had questions which kept the conversation going, even as we toasted with Veuve Clicquot champagne and reveled in desserts fit for any of the elegant Parisian salons described by Marcel. 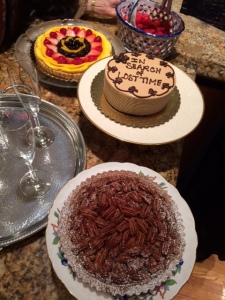 Marilyn and Stuart brought desserts from La Farine Boulangerie Patisserie in Berkeley. Jay and I brought the French champagne!

After 4 years of meeting every six to eight weeks for an inspiring French lunch and conversation about our reading, Helene, Marilyn and I have finally finished all 3,300 pages of Proust, plus supplementary readings. We began our celebration with a couple of weeks of furious back-and-forth emails and one conference call, preparing the presentation and the evening.

Dinner at L’Ardoise Bistro on Noe was an authentic French feast. It was fun to “dress up,” the three of us showing off our finery, from petit point beaded bag and kid gloves, to minks, sequins, Chanel and “bling.” The guys got into the spirit of the evening, Stuart in a velvet jacket and turtleneck, Larry with his pleated shirt, and he and Jay in suits and shiny new ties. The conversation flitted from the food to couture to Paris, New York, art, music and literature.

After this playtime, we adjourned to Helene’s house. We had invited the men, who we assumed would never read Proust, to a “show and tell, including a synopsis, readings, and the music and paintings referred to in Proust’s masterwork. 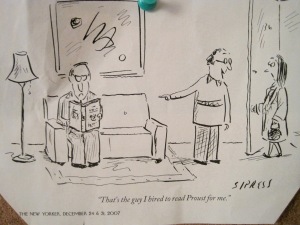 “That’s the guy I hired to read Proust for me.” I clipped this cartoon from The New Yorker way back in 2007.

For those of you who have ever been curious about this undertaking, celebrated in New Yorker cartoons, kitsch posters and innumerable literary and lowbrow references since Proust’s death in 1922, here are some excerpts from our half hour presentation:

Through the minutae of everyday life, the author builds a scene, an ambiance, and characters who the reader can remember vividly a thousand pages later. At the same time, he also makes insightful comments on timeless subjects and contemporary controversies. Through imagery, he imparts his vast, encyclopedic knowledge of every aspect of history and the arts, and the politics, science, and technology of his day. The reader is exposed to the entirety of French life between the 1890s and the end of World War I.

Proust’s three central themes, which intertwine and reinforce one another, are: love, social status, and art. We proceeded to share our favorite readings from the three themes.

Proust’s novel is a very visual work, devoted to detailed descriptions of people, their manners and their arts. It teems with references to painters and paintings. We were fortunate that the book, Paintings in Proust, was published recently by a local Bay Area author Eric Karpales, who identified and located every painting mentioned in the novel. Reading the novel with the book as a companion made the descriptions really come alive. Marilyn shared reproductions and relevant readings from both Karpales and Proust.

The novel is also full of references to music, both classical and popular. As with painting, music preserves the “time” that our memories distort and prevents the past from disappearing. Helene with technical assistance from Larry, presented numerous wonderful musical and YouTube selections.

All seven volumes actually tell the one story of Marcel’s journey, along with everything and everyone he encounters, and the discoveries he makes, over many years.

Through periods of intense seeking of love and social status, the narrator comes to realize the futility in the first quest and the irony in the second. Along the way, he has gained secret insights involving forms of memory, time, perception, illusion and death. These secret insights, such has how a sense impression can trigger a powerful “involuntary memory” from any part of his life, bring him full circle, back to his childhood. He finds his way forward in his career as writer. He then begins to write the book we have just read.

Throughout our years, the three of us encouraged and inspired one another. We all contributed from our individual strengths and backgrounds. I have contributed from my background in art history and as a novelist. Helene is an old friend, going back to 1966, our Berkeley sorority days. She spent many years teaching Comparative/French Literature at San Francisco City College, which is why I thought to approach her for my “retirement” project, already a dream of many years. Marilyn is a new friend, brought in by Helene from her other more “normal” book club, who had already taken an Osher Lifelong Learning course on Proust, though like us, she had never read it all the way through. Friendship between the three of us—including stories from our own “remembrances” and sharing grandchildren anecdotes and cellphone photos—has grown along with our understanding of what makes amazing literature. Proust gave us patience and a sense of commitment, and he made us feel, understand, laugh, cry, and yes, remember!

Like Loading...
This entry was posted in literature, Reading groups, Uncategorized and tagged Proust. Bookmark the permalink.

4 Responses to Reading Proust with Friends – The Celebration!