My Confessions from the Summer of Love

Posted on June 21, 2017 by elisefrancesmiller 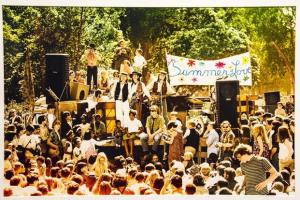 OTHER people having a blast in San Francisco’s Golden Gate Park during the summer of 1967.

During the Summer of Love I was in Berkeley—not in San Francisco. Recently, listening to a PBS special on the Beatles’ masterpiece, “Sergeant Pepper’s Lonely Hearts Club Band,” brought me back, as only music can do.*  The Beatles and their production team spent months in a studio, away from the adoring, frenetic crowds, creating something that had never been heard before, and that plays over and over in the mind. 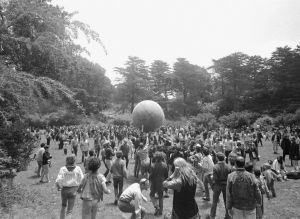 That summer, I was certainly aware of what was going on across the San Francisco Bay. But ensconced as I was within a particular, private zone in the summer of 1967, I deliberately ignored the promising news that our generation over in the Haight was ushering in a better world. I had no car, my roommates were from the City and had no desire to go “home,” and the hordes of teenagers who greeted me with palms upraised for a handout every time I exited my apartment made the promised encounter with nirvana seem less appealing.

But those are just excuses. It was the “zone” that kept me in place. What kind of zone am I talking about?

During spring quarter, my roommate’s sister was in Israel before and during the Six-Day War, while my brother was off fighting in Vietnam. We developed a ritual: listen to the news, then sit on the sofa with mugs of warm milk and honey and try to recuperate. Summer classes could not come too soon. One was a painting class related to my art history major. I spent hours outdoors, sketching those ancient olive trees, twisted into enchantment, that sprung up around campus like wise old souls. And painting a building like South Hall, the elder dean of campus structures, also brought me comfort.

When I wasn’t clinging to the past, I painted a flotilla of hot air balloons, vivid orange and cyan blue, bright enough to stand out against a summer sky. I imagined myself drifting in my own basket over the Atlantic on my way to Paris, Eiffel Tower in view. For that was why I was at Cal for summer quarter: so I could leave for Paris with my other roommate the following spring. The spring and summer quarters of 1968, we would escape to the City of Light. 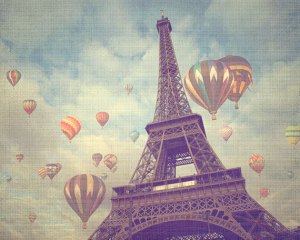 My painting has disappeared, so I offer you this lovely dream.

That was my zone. Painting, dreaming, listening to music, reading all the books I considered to be the must-read great literature that would surely teach me about life without my having to actually live it. And trying to absorb the tremendous shocks of world events, both the dogged disaster of the immoral war in which my brother was still embroiled, and the surprise and the relief that I then felt about the outcome of the Six-Day War.

Meanwhile, I listened to the Beatles’ new album incessantly, memorized the words, shared it with friends, walked about by day and dreamed by night to those tunes.

St. Pepper introduced me to details of Hindu culture, and I read Siddhartha, deciding that well (huff!), of course an old man can reject life (and sex!) to find inner peace. Fine for him to say… 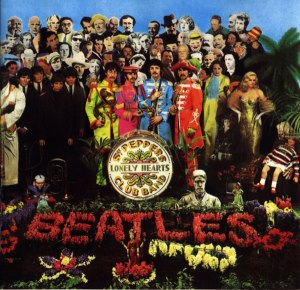 St. Pepper enhanced my appreciation of sounds that were not only electronic, but electric, inspired, a harbinger of inventiveness to come.

And St. Pepper awakened me to the courage that would be required if I ever wanted to be any kind of an “artist” myself, revealing personal moments and emotions, childhood memories, the convergence of public events and private heartbreak, and the simple “answer” to world peace: the ability to explore and accept reality from multiple viewpoints.

During the Summer of Love, instead of being spurred to action, I was immobilized by events. Other students coped by opening themselves up to politics and protest, or meditation and spirituality. But in the summer between my sophomore and junior years at Cal, the arts were my protective “zone.”

And here’s my point: I bought the Beatles’ album, appreciated it, but until I heard the PBS special this week, I did not know why it was so impactful nor why I was so attracted to it.

Thirty years later, I knew what I had felt about war, politics, sex, race, religion and the arts that college summer, and felt keenly that I had stayed in my zone. But I did not know why. Then I began to research what happened behind the scenes, cultural changes and political upheavals, and thought deeply about my identity and anguish, and about how I did and did not fit into the San Francisco love-fest scene.

In 2012, I found Sand Hill Review Press and launched A Time to Cast Away Stones, which was fated, in 2016, to become The Berkeley Girl, in Paris 1968. This fall, The Berkeley Girl: Rendezvous in London and Other Stories from the 1960s will be published. This book continues to draw on more of those memories—of the stirring challenges of Eastern spirituality and feminism, and how we conjured love, another sort of balm, in those years of dislocation and anxiety.

*You may want to re-visit my blog on “Music Stirs Public Movements and Special Private Moments,” (https://elisefrancesmiller.com/2016/09/23/music-stirs-public-movements-and-special-private-moments/music blog).

6 Responses to My Confessions from the Summer of Love